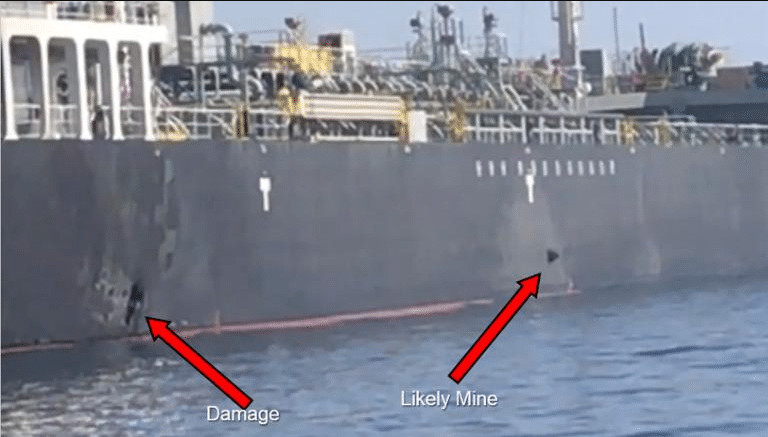 On Thursday, two tankers one carrying oil and another with chemicals attacked in the international water nearby the Strait of Hormuz. By exactly 6.12AM the distress signal received by the US Navy ships, according to that signal the Japanese oil tanker Kokuka Courageous traveling from Saudi to Singapore witnessed the explosion and damaged, Owing to that crew abandoning ship.

Followed by that distress signal on 7 AM, US Navy ships received 2nd distress signal with the message, a Norwegian tanker “Front Altair” traveling from UAE to Taiwan also been hit.

Impact of the hit on Takers in the Middle East

Within a few hours of the explosion happened in those 2 ships at international water nearby Strait of Hormuz, the oil prices rose about 4%. In response to the distress signals, the US Navy moved to the area to offer aid and to investigate the attacks over the ships.

The US releases the Video and blames Iran

The secretary of the United States Mike Pompeo has blamed the Iranian navy for attacking Japanese tanker “Kokuka Courageous” and “Front Altair” Norwegian tanker.  During the press meet, the Mike Pompeo referred to the video footage released by the US Central Command as a proof which portraits Iranian sailors removing the unexploded mine from the Japanese hull.

What the Video Showcased?

In the released video of US Central Command, a smaller sized navy boat of Iran seen coming close to the Japanese tanker and a person who stands on the bow of the smaller Iranian navy boat seen removing an object from the Japanese Kokura Courageous’ hull.

One of the high officials from the US central command has conveyed as the video footage captured from the US military aircraft which flew overhead the Japanese tanker.  He also went on adding that the Iranians were finding loopholes to destroy the evidence of their involvement in the incident.

On pointing that incident, another high official from US secretariat has told to the CNN as “No interference with USS Bainbridge, or its mission will be tolerated.”